The itinerary of the Rosalía Route proposed by Avelino Abuín de Tembra begins and ends in Santiago de Compostela, from Praza de Vigo to the Pantheon of Galicia in San Domingos de Bonaval.

Rosalía de Castro was born in Santiago de Compostela on February 24, 1837, in a house in Camiño Novo (now called Avenida de Rosalía de Castro) that no longer exists. Behind this house lay the fields of San Xosé, Ramírez and Cornes. Today, Praza de Vigo features a monument that Santiago City Council dedicated to Rosalía in 1982.

The proposed itinerary sets out from Praza de Vigo in two directions: southwards, to Conxo, passing through important places in Rosalía de Castro’s life such as Cornes; or towards the next stop at the Pantheon of Galicia in San Domingos de Bonaval (in the north of the city), passing through the park called the Alameda (and observing Rosalía’s statue) and other sites in Compostela’s old town where she lived.

Cornes and Conxo, with its Convent  and its Carballeira (oak grove), were important places in Rosalía de Castro’s life. Cornes was where Rosalía grew up and also the title of one of her poems in Follas Novas. It used to belong to the old municipality of Conxo, until it became part of the municipality of Santiago in 1925. Conxo was where she was born and the setting of her first novel, El primer loco.

The other part of the suggested route runs from Praza de Vigo towards the Pantheon of Galicia, passing through the park called the Alameda, which features a granite statue made by Isidro de Benito and Francisco Crivillés in 1917. In addition to the figure of the writer, the monument includes traditional characters, the life and soul of her works, and the titles of her best-known publications.

Before reaching the end point at Bonaval, we can visit Praza de Mazarelos, which features one of the houses in which Rosalía de Castro lived and where she completed her book Cantares Gallegos.

The following sites in Compostela’s old town are also linked to the author: No. 6 Rúa dos Bautizados, where her mother lived from 1851 to 1855; No. 1 Rúa da Conga: her first child, Alejandra, was born here in 1859. According to her official biography, between 1878 and 1879 she also lived first of all at No. 2 Rúa de Altamira and then at No. 9 Rúa do Hórreo.

To complete the itinerary, before finishing in Bonaval, we can visit Praza do Obradoiro featuring the Hostal de los Reyes Católicos and Cathedral. Both the Hostal and its interior chapel have been declared “BICs” (Properties of Cultural Interest).

Rosalía de Castro was christened in the Hostal de los Reyes Católicos’ chapel by her godmother María Francisca Martínez, her mother’s maid (February 24, 1837). Rosalía writes about this building and her visits to Monte Pedroso in her book En las Orillas del Sar. Several poems in her book Follas Novas are dedicated to Santiago Cathedral.

As a supplementary activity for this day, we suggest following the Brañas do Sar trail, beginning at the Collegiate Church of Sar and ending at the grove called Bosque do Banquete de Conxo. Built in the 12th century on the banks of the Sar River, the Collegiate Church is the one, along with the Cathedral, that preserves the most of its original Romanesque stonework. It is also a “BIC” (Property of Cultural Interest). Following the trail alongside the river, bordered to the east by Monte Gaiás and Santas Mariñas, we cross the Brañas do Sar area and continue through Eugenio Granell Park as far as the grove called Bosque do Banquete de Conxo. 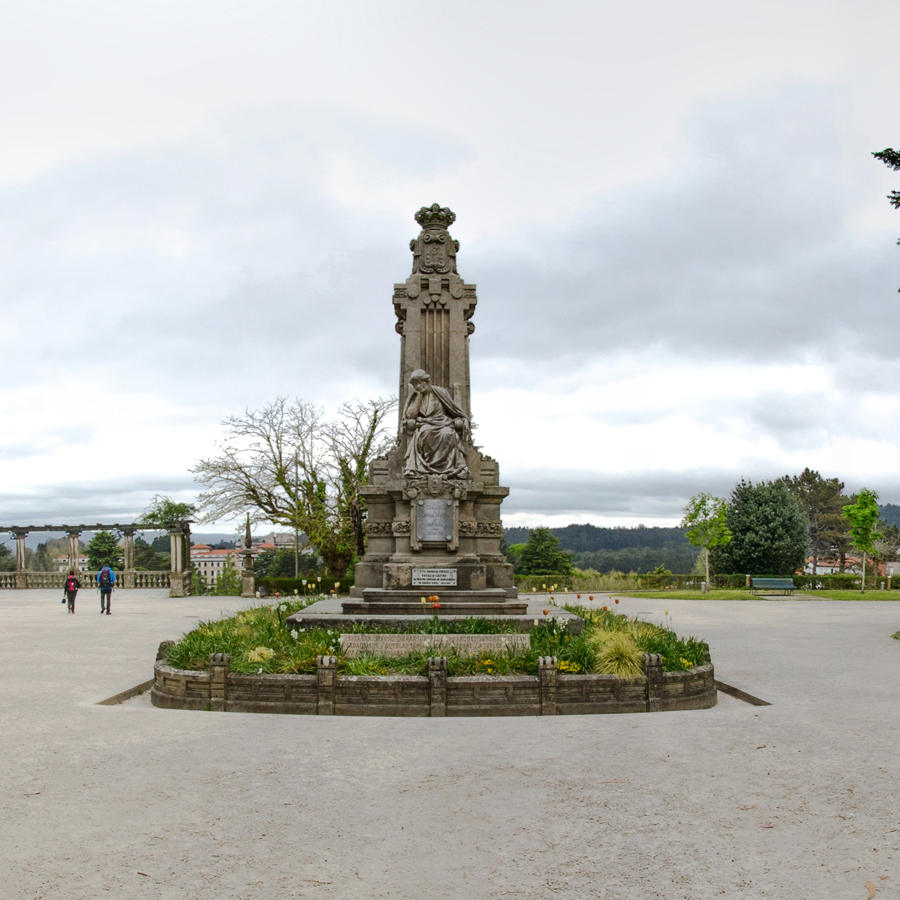 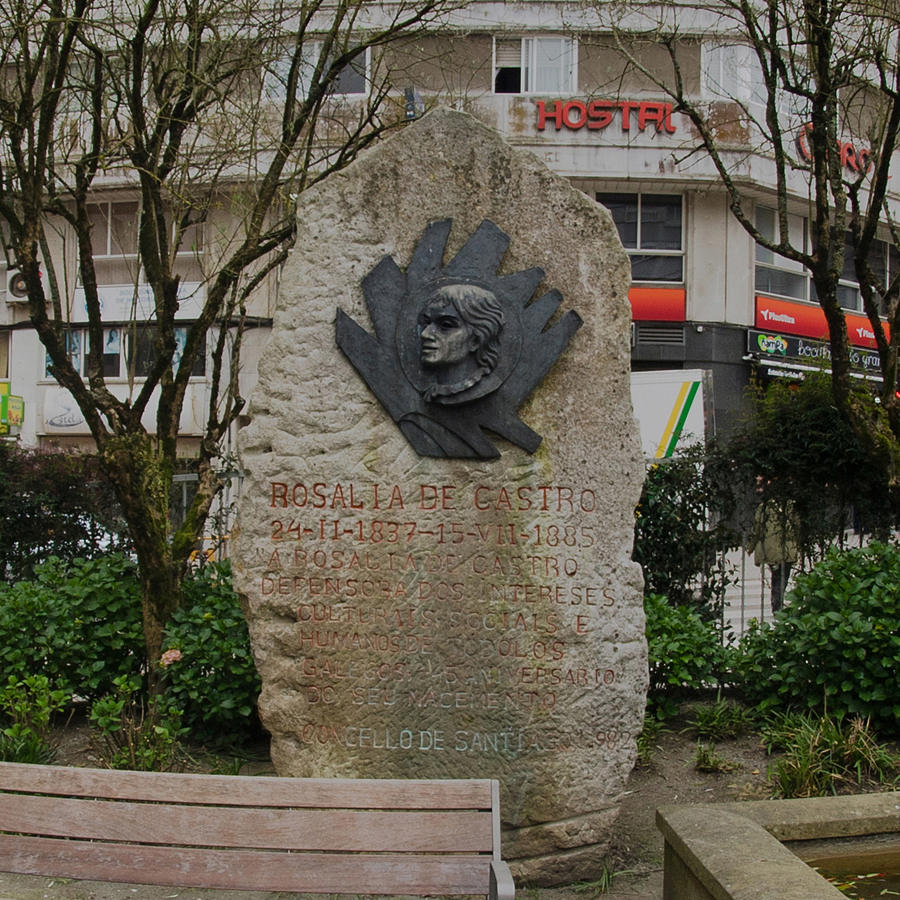 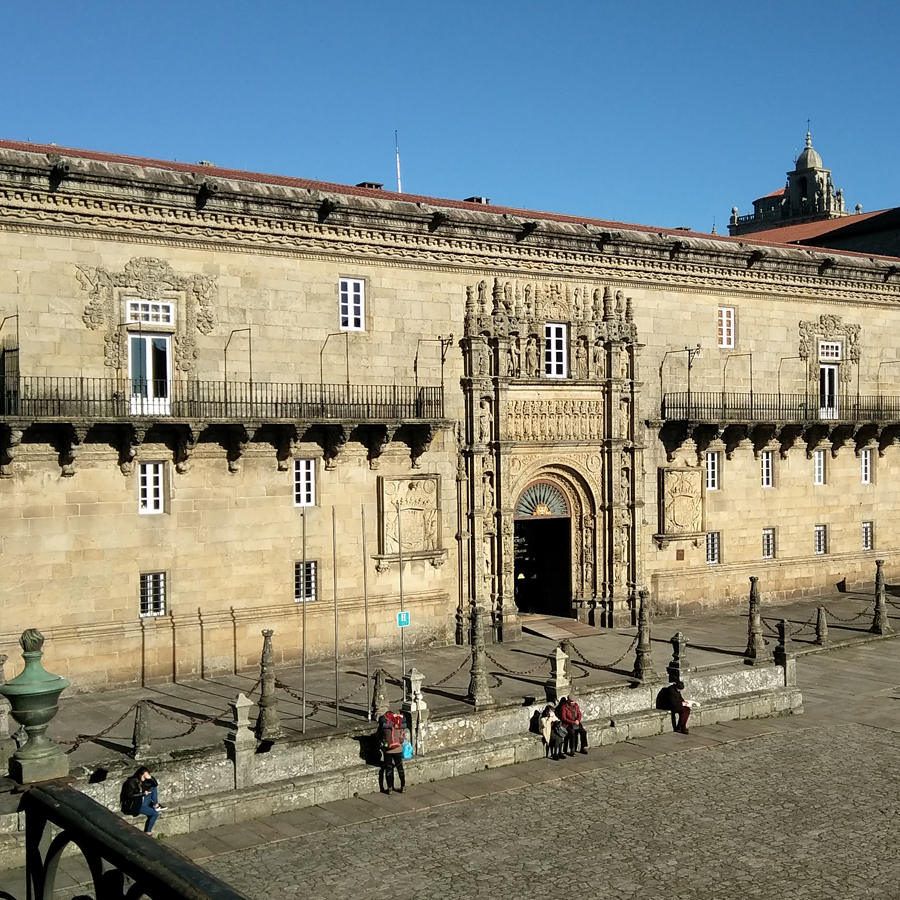 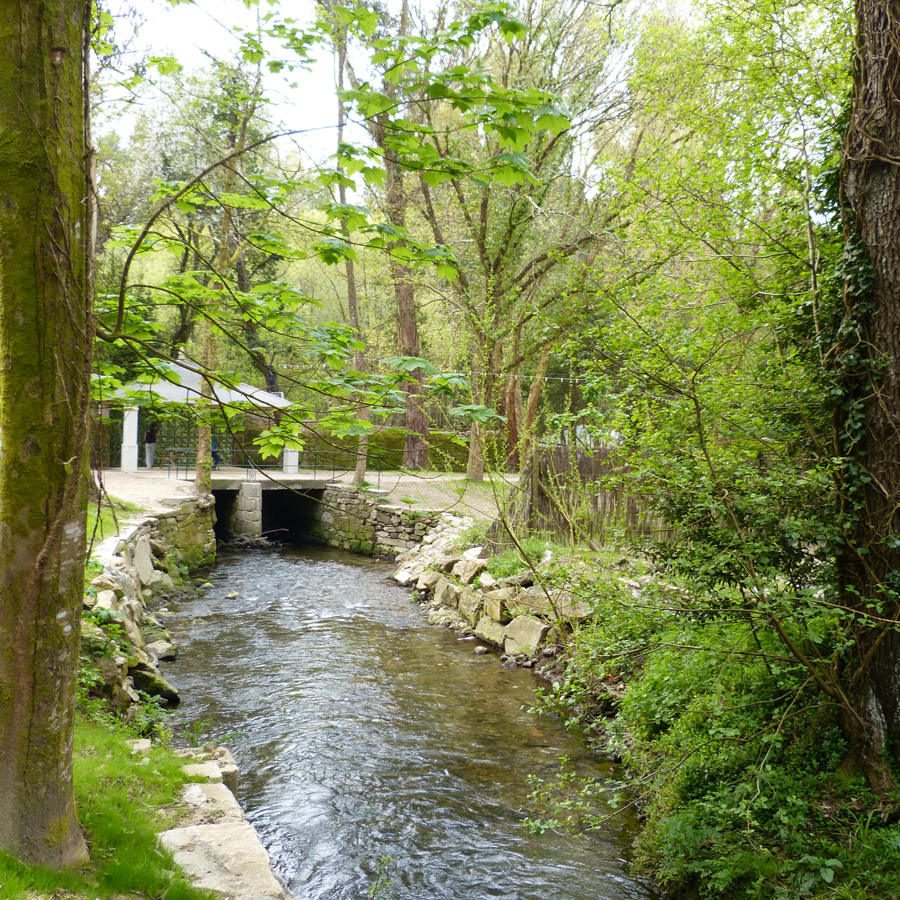 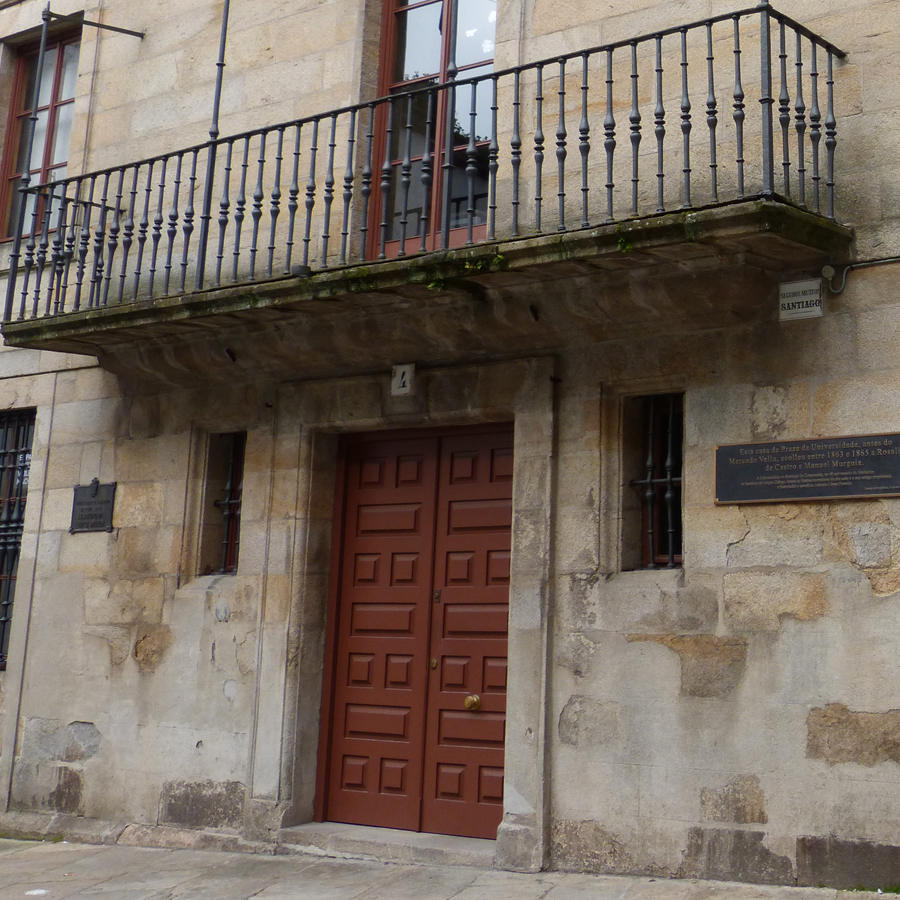 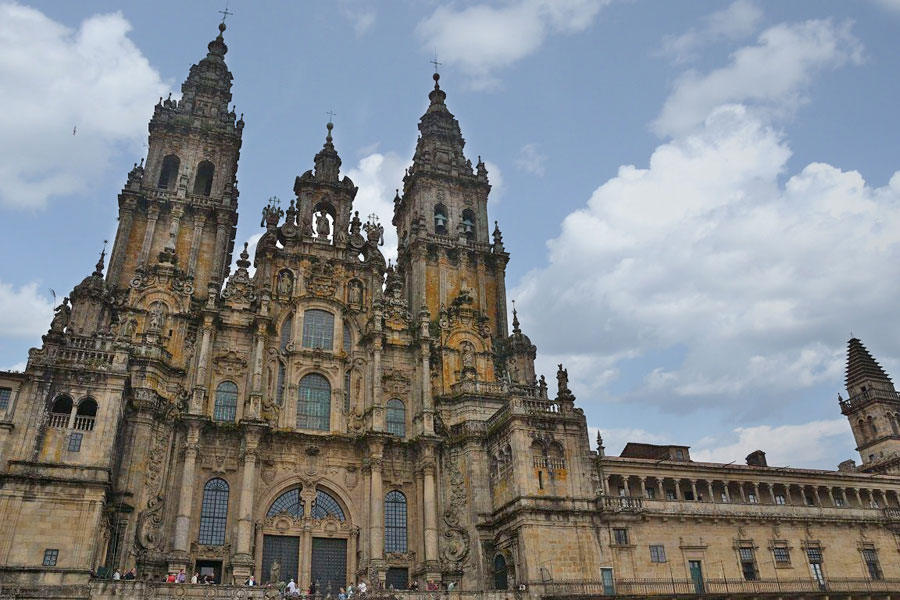 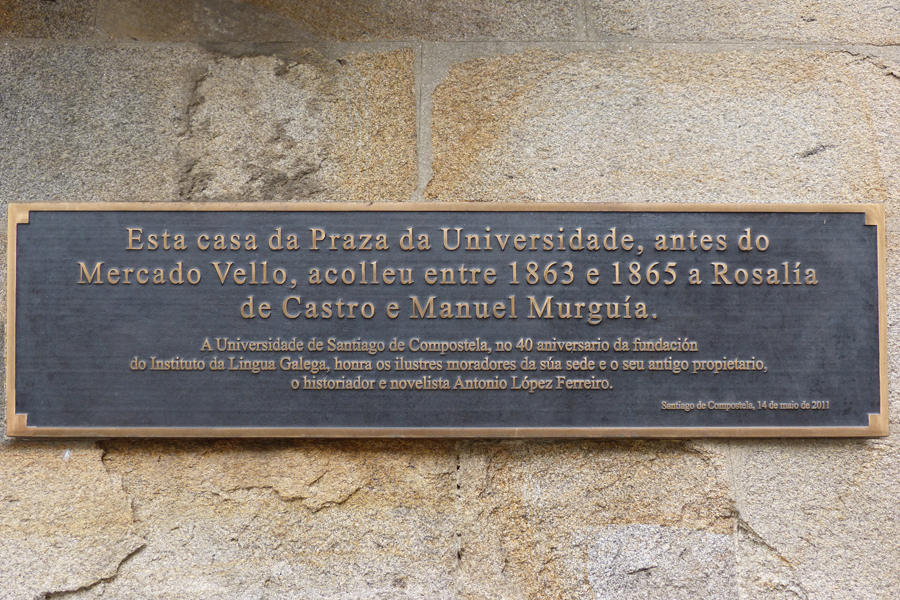